Tony Corless is a professional DJ who you will find on the decks in various venues throughout North West England.
Tony has vast experience which he can call on to help your venue or event achieve its goals.
Tony has worked for most of the main High Street brands along with many independent bars and clubs,is very versatile and capable of doing all types of events whether its a party night a dance event or top 40 and chart music.
Tony is well known for his music knowledge is great at reading the crowd and keeping the customers happy.
Tony also has very high quality mixing and microphone skill.

HOW IT ALL STARTED

Tony was always interested in music and as a teenager played bass guitar in a few local groups made up of friends,he then started to visit one or two venues and became interested in DJing,at first he made friends with a local DJ called Graham Gold and Graham used to let him have a go on the decks early in the night after a while Tony started to do more and more of the night,later when Graham deceided to retire Tony was offered Thursday and Friday nights at the disco in the back room of his local pub the Fernhurst in Blackburn.
Tony then went on to work at various venues in Blackburn and also to do lots of mobile disco's.
Not long after this Tony went on holiday to Spain and noticed that most of the DJs mixed and blended the records together and found this fascinating.
Not long after Tony moved to London and worked in Clubs and Bars and also did mobile discos.The interest in mixing was still there and Tony decided to book himself a few hours mixing tuition at noise gate studios in London and was taught by Double Trouble who were responsible for a few hit singles one of which you can see below.


The mixing got better and better and the work came in.
After a couple of years in London Tony moved back home to Blackburn where again he got
plenty of work in the local area working in Clubs and doing mobile discos,Tony
moved to Switzerland and worked over there for a while before returning
home.
He continued working Clubs and Bars working
at some of the best venues around at the time sadly most of these venues are no
more but were great in their heyday.
Tony worked further afield
working for Chains like Branigans and first Leisure plus lots of independant
clubs sutch as Club Expo in Burnley owned by Paul Taylor famous for the Retro
nights and famous for the band Loveland.video below.
Whilst working for first leisure Tony also discovered that a DJ who was very well know in London back in the day when Tony lived there also now worked for first leisure,The dj was Les Adams who had been signed to a and m records and was one of the first dj/producers from the uk.Les is also very well know for his technical abilitys as a DJ with awesome mixing skills but he also knows how to play the right record at the right time.Les also used to write for DJ Magazine and was head DJ lecturer at the Guilford Academy of Contempory Music.Tony became friends with Les and learned even more skills which he then put into practise.
More club and bar gigs followed around then around 2001 Tony started to work for the Walkabout chain and ended up working 5 and 6 nights a week all over the North West in towns and citys like Liverpool,Manchester,Blackpool,Wigan,Burnley,Leeds,Birmingham the list goes on and on.
Tony continued to work 5 nights a week for Walkabout for almost ten years some residencies lasting as long as 6 and a half years.Tony continues to DJ occasionally for Walkabout and also works for independant venues and other chains such as Barracuda,Luminar and Stonegate 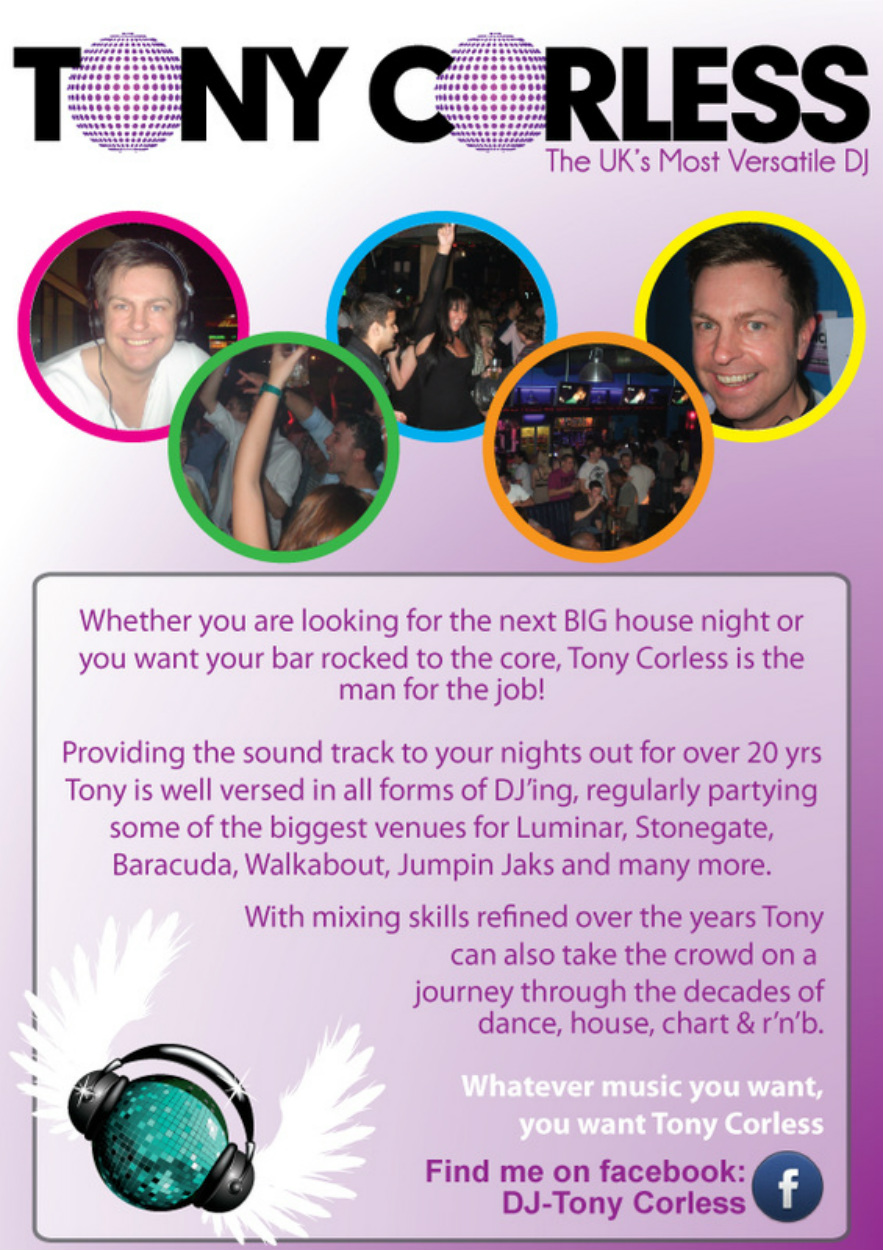